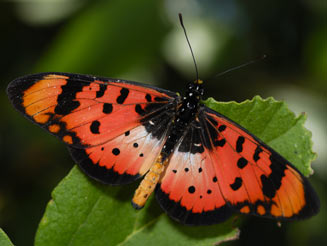 Usually, front and back wings of the female Acraea Butterfly are larger than the male ones, with the black color spots. The upper discal spots of these female butterflies habitually coalescing and producing an uneven oblique small band and the black color edging to top and the termen on the front wing and the black color terminal band on the back wing are proportionately wider, with the spots traversing the latter bigger and whitish.

The underside of the male Acraea Butterfly is ochraceous yellow or a pale yellowish-brown in color. The top of their front wing is pale to white in color, with the black color markings similar to its upper side, but rather blurred and spread.

The underside of the female Acraea Butterfly is much duller and paler, with markings like on the upperside, and similar to that of the male butterfly. The spots on their hind wing are better defined than on their upperside.

The Acraea Butterfly displays an oily and foul yellow fluid when handled and it is inedible to birds and to nearly all insects. They are well secluded and have a sluggish and weak flight, habitually visiting flowers and are effortlessly netted.

Acraea Butterfly are insects. A Acraea Butterfly is a herbivore; Meaning that as a caterpillar its first food is its own eggshell and than it will eat the leaves of the plant on which it is hatched. When it becomes a butterfly, it will feed mostly on nectar from flowers, rotting fruit and water with a "proboscis" - a long narrow tube in their mouth that looks like a straw.

When Acraea caterpillars become fully grown they will attach to an appropriate leaf or small branch, than they will shed the outside layer of their skin and a hard skin underneath known as a "chrysalis" will be their new look
An adult Acraea Butterfly will come out from the "chrysalis" than it waits a few hours for its wings to dry and fill with blood, before it takes its first flight.

Search the Web for More information on Acraea Butterfly at LookSeek.com Search