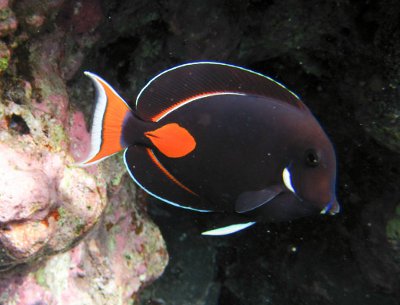 The Achilles Tang or Acanthurus Achilles is also called the Achilles Surgeonfish or Red Tailed Surgeon.

This fish is very difficult to raise in a fish tank. Not only do they need a tank at least 180 gallons or more in capacity, they need rather turbulent water since they live in the parts of a reef with a constant flow of current. The water sg should be between 1.020 and 1.025. The water pH must be between 8.1 and 8.4. They need a temperature around 74 degrees. At temperatures below 72 F, they begin to slow down and suffer. Above 78 F, their metabolisms speed up to the to the point that they are hard to adequately feed.

The Achilles Tang is an omnivore. A fully grown adult at eight inches long will eat a five inch square algae mat several times a week. If the fish were in the wild, it would eat benthic algae. They will eat blood worms, brine shrimp and a variety of fish foods as well. You can give the Achilles Tang in your tank fresh bloodworms or freeze dried ones, it’ll eat either. You can feed them dried seaweed in place of the algae mat. Tie it to a rock so that it looks natural or hold it in place with a vegetable clip so that it sways in the water so the fish will want to eat it. Regular plant consumption reduces aggression against other Achilles Tang fish and similarly sized fish of other species.

The Achilles Tang cannot share a tank with sharks, rays, batfish or most other surgeon fish. They ignore crabs, snails and other invertebrates. They readily share a tank with bennies, gobies, lionfish, anglers, chromis, damsels, parrot fish, puffers and live corals. Achilles Tang fish want a habitat with lots of hiding holes, but they won’t destroy live coral to create it.

Many people enjoy the dark brown or blue-black body of the Achilles Tang offset by a yellow or orange stripe on the tail in juveniles that grows to a full spot by adulthood. You shouldn’t introduce juvenile or fry Achilles Tang fish into your salt water tank. Instead, introduce them when they are at least five inches long.