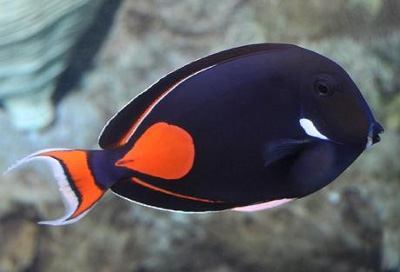 Achilles Surgeonfish are rated very difficult to take care of for a saltwater species. They need tanks with at least 180 gallons of capacity. The ideal tank is between 72 and 78 degrees. Don’t raise the water temperature higher than this, since it will increase their metabolic rate. The pH should be between 8.1 and 8.4. The specific gravity should be 1.020 to 1.025. They need strong water flow. This can be maintained using a sump pump.
Achilles Surgeonfish are semi-aggressive. They are aggressive to other surgeonfish. Use caution when putting them in a tank with biennies and fox face. Do not put them in tanks with sharks or rays. They ignore invertebrates like crabs. They can share a tank with gobies and lionfish.

The Achilles Surgeonfish is also called the Achilles Tang and Red Tailed Surgeon. They eat meaty foods like brine shrimp, but they also eat seaweed and algae. In the wild, they mostly eat benthic algae. Feeding them more algae and plant based food reduces their aggression level and immune systems. You can do this by offering dried seaweed at least three times a week. Attach the seaweed to a rock via a tether or veggie clip to entice the fish to eat it. A fully grown Achilles Tang can eat a five inch square of seaweed a day.

The Achilles Surgeonfish is considered very difficult to maintain in a tank and have a high death rate in captivity. The ideal age to introduce one to the tank is when it is around five inches long. A juvenile is unlikely to survive when placed in a new tank.