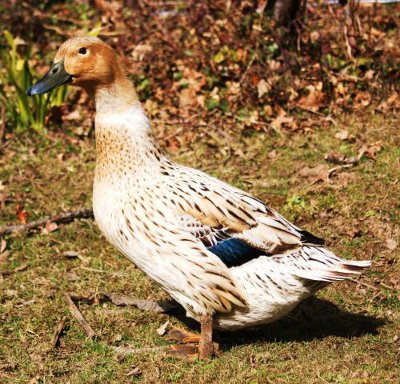 The Female Abacot ranger duck are normally lighter than the males. The average females weighs about 5.5 pounds (2.5 kg) and the male weighs 6.6 pounds (3 kg). Rarely will you find this Abacot ranger duck flying. In fact, the Abacot Ranger Duck are not at all good at flying.

A "bill" is what is call a duck's mouth. There are no teeth in the Abacot Ranger Ducks bill, they have rows of thin bristles, which helps them to filter pieces of nutrition out of the water. Abacot Ranger Ducks swallow there food whole and it goes to an organ called a gizzard, were the food is first ground up and than moves on to the stomach. The different bill shapes and sizes for finding food, has over time mutated to fit each environment. The Abacot Ranger Ducks bill is flat and broad and has rows of fine incision along the outer edge called "lamellae". meaning a thin membrane, plate, scale or layer, as of cell wall or bone tissue. The larnellae helps the duck to clutch food for feeding.

Underneath the water-proof coat are downy soft fluffy feathers which keep the Abacot Ranger Ducks body warm. Ducks keep clean by being able to turn their heads completely backwards, and put their beaks into their feathers by preening themselves.

Abacot Ranger Duck have webbed feet, that makes them act like paddles, designed for swimming. The Abacot Ranger Duck push their webbed paddle feet back in a kicking motion, this allows them to move swift through the water and when the feet come back, they will close for less water resistance. The Abacot Ranger Duck's paddle feet do not feel cold, even when it swims in cold icy water. The webbed feet makes a duck waddle instead of walk. The duck’s feet have capillaries which help blood flow to their feet. The warm blood flow down the leg and creates a heat exchange system. When the blood flows down the leg, it meets the cold blood and is warmed up to keep the ducks feet warm. Ducks feet are thin because they contain soft tissue and few muscles.

A special feature that the Abacot Ranger Duck has is its water-proof feathers, even when the duck dives underwater, its downy under-layer of feathers will stay totally 100% dry. There is a special gland called the "Preen Gland" also called Oil Gland or Uropygial, that produces oil that is near the duck's tail which covers and spreads the outer coat of the duck's feathers, which makes the duck water-proof.

The Abacot Ranger Duck is a Precocial (meaning) Born or hatched with the eyes open, a covering of hair or down, capable of a high degree of independent activity from birth and able to leave the nest just a few hours after hatching.

Search the Web for More information on Abacot Rangers Duck at LookSeek.com Search