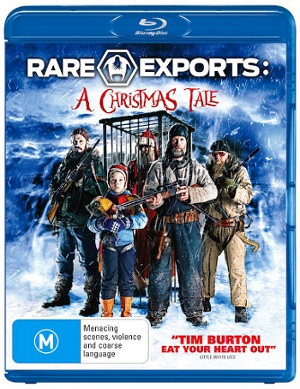 Today I thought I would review a Christmas movie that I really liked.

The Finnish Fantasy film "Rare Exports: A Christmas Tale" from 2010 directed by Jalmari Helander, is a rare film indeed and proves that only foreign filmmakers have original ideas anymore. It's very cool, Funny, Creepy, Scary and Smart really really Smart.

On Christmas Eve in Finland a corporate archeological team has unearthed Santa Claus, but this isn't the Jolly Ole St Nick, we all know and love.

After Mr. Claus has been dug up all the children in the small town seem to disappear, well all except for Pietari (Onni Tommila). The reindeer herding people of the village, thinking that wolves have attacked their deer accidentally capture Santa and decide to hold him for ransom.

This is all I'm going to tell you, so no spoilers, because the movie is a lot of fun.

This film also uses a lot of legends from the original folklore of Santa Claus, which are very clever and like I said above, really smart. Now I love movies but I usually can see some twist coming a mile away. This one threw for such a loop I smiled with joy right to the very end.

The movie is great to look at beautiful, and the location where they shot is epic. The actors were great, I love movies where you believe the characters 100%. Actually I think the kid and the actor who played his father are actually father and son in real life. At least that's the gist I get from looking up on IMDB.

Also it's one of those movies that begs for a sequel even though it is really not needed.