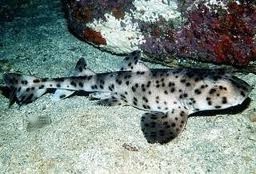 The Galapagos Bullhead Shark just as the name suggests has a large head with a snub snout. Its bizarre look is primarily attributed to its grayish brown skin which has a dark spotting. Its pectoral fins are relatively large and this further adds to their distinct looks and give them the unique ability to crawl along the ocean floor. Galapagos Bullhead Shark is closely related to the California Horn shark. To enable it deter predators, this species of shark has two small dorsal fins with a sharp spine.

Search the Web for More information on Galapagos Bullhead Shark at LookSeek.com Search