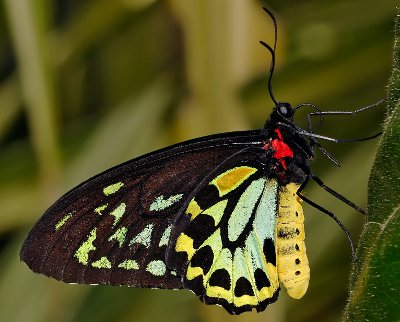 The adult Cairns Birdwing butterflies feed on the nectar of the flowers of food plants such as Hibiscus, Lantana and Bougainvillea in housing gardens. The larvae feed on the leaves of the food plants, such as Aristolochia acuminata, Pararistolochia australopithecurus, and P. sparusifolia.

Cairns Birdwing Butterfly are insects. A Cairns Birdwing Butterfly is a herbivore; Meaning that as a caterpillar its first food is its own eggshell and than it will eat the leaves of the plant on which it is hatched. When it becomes a butterfly, it will feed mostly on nectar from flowers, rotting fruit and water with a "proboscis" - a long narrow tube in their mouth that looks like a straw.

When Cairns Birdwing caterpillars become fully grown they will attach to an appropriate leaf or small branch, than they will shed the outside layer of their skin and a hard skin underneath known as a "chrysalis" will be their new look
An adult Cairns Birdwing Butterfly will come out from the "chrysalis" than it waits a few hours for its wings to dry and fill with blood, before it takes its first flight.

Search the Web for More information on Cairns Birdwing Butterfly at LookSeek.com Search