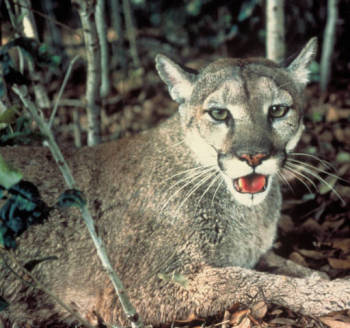 Florida panthers live in swamp forests and pine-lands. They will live in prairies, swamps and forests.

The Florida panther once lived throughout the Southeast. They used to range from Arkansas to South Carolina to Florida. Now the only breeding population is in Florida, sought of the Caloosahatchee River.

Florida panthers are solitary animals. They are most active between sunset and sunrise.
The average male panther needs around 200 square miles (520 square km) of territory, making it hard to set aside enough land to sustain a viable population. Females have smaller territories of around 75 square miles (195 square km). They feed on deer, raccoons, feral pigs, birds, rabbits, armadillos and other animals. They will eat reptiles.

Florida panthers are mostly quiet but can vocalize via purrs, growls, hisses, moans and chirps. The females yowl around mating time.
Gestation time is 90 days for this species. Their mating season is year-round, but it peaks in the winter and spring.

Florida panthers give birth to litters of one to four kittens. Kittens are born with spots that fade as they age. Rarely do all kittens survive. Kittens stay with the mother for up to two years. After that, both males and females become solitary.

Males can weigh up to 160 pounds (73 kg) and reach seven feet long. Females are smaller. They can live up to twelve years in the wild.

Threats to the Florida Panther Species

The greatest threat to the species is habitat destruction and fragmentation. Road kills and illegal hunting are another threat to the Florida panther. Nineteen panthers were killed by vehicles in 2012, up from the fifteen killed by cars in 2013.

The species was originally drive almost to extinction by hunting to protect people and livestock from predation.

Search the Web for More information on Florida Panther at LookSeek.com Search