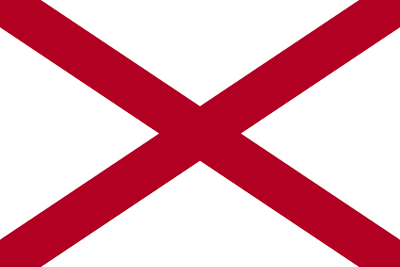 Alabama, which is shortly mentioned as AL, is one of the 50 states of the United States, situated in the southeast part of the United States. It is surrounded by Georgia in the east, Mississippi in the west Florida in the south, Tennessee in the north and the Gulf of Mexico in the south. Alabama is the 23rd most heavily populated and 30th most extensive state of the total 50 United States. Alabama contains one among the longest navigable domestic waterways in the country at 1,300 miles.

Alabama was the 22nd state admitted to the union on the 14th of December 1819. The total land area of Alabama is 50645.33 square miles, which offers the state an area rank of 30 out of the available 50 states in the United States. In addition, water surface occupies one square miles of the total area of the state within its boundaries. There are a total of 67 counties in Alabama among which the Houston County was the most recent county formed in the state, on the 9th of February 1903.

Currently, there are 9 State Electoral Votes in Alabama. The population of the state is increased by 332,636 as of 2012. The State Quarter issue Date of Alabama is March 17, 2003. “We Dare Defend Our Rights” is the state motto of Alabama.

The name of the state bird of Alabama is the Yellowhammer, so it is nicknamed as Yellowhammer State. Heart of Dixie and Cotton State are other nicknames of Alabama. The Longleaf Pine is the state tree of Alabama, and Camellia is the state flower. Montgomery is the state capital of Alabama. Birmingham is the biggest of all cities in Alabama by population, and in total land area the Huntsville city ranks first. Mobile, the city which was discovered by French colonists is the oldest city in Alabama.

Search the Web for More information on Alabama at LookSeek.com Search